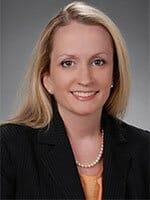 Liberty Richards is an associate attorney with Reeder Law Firm. Liberty’s practice is focused in the area of family law. She has experience representing clients in child support establishment and modification matters and in removal proceedings before the immigration courts.

Prior to attending law school, Liberty served as a staff member with the Foreign Affairs Committee in the United States House of Representatives for over four years. Prior to joining Reeder Law Firm, Liberty participated in the Attorney General’s Honors Program with the United States Department of Justice where she clerked for the Immigration Court in Atlanta, Georgia.

Liberty received her undergraduate degree from Barnard College of Columbia University and earned her law degree from Mercer University, Walter F. George School of Law. She is a member in good standing of the Georgia State Bar and is proficient in the French language.